Gerald L. Maatman, Jr., chair of Duane Morris’ Workplace Class Action group, has nearly four decades’ experience of practicing law and has defended some of the most significant bet-the-company cases ever filed against corporate America. Mr. Maatman has represented companies, executive teams and boards across the country in class action litigation, ranging in size from thousands to hundreds of thousands of claims by employees. Among his accomplishments, he defended and defeated the largest systemic enforcement action ever brought in the history of the U.S. Equal Employment Opportunity Commission, the first Attorney General prosecution of a Wall Street company for workplace discrimination and harassment, and the largest wage & hour class and collective actions ever brought in Florida and New York. While he is known to be a fierce litigator, he also helps his clients anticipate large-scale litigations risks before they happen to prevent issues that could turn into litigation. Mr. Maatman pioneered the process of conducting employment-practices audits to assist employers in structuring effective and practical personnel policies and protocols. Profiled in The Wall Street Journal, these audits are designed to minimize the incidence of employment-related class action litigation and to maximize management discretion and workplace productivity. He has served as a legal commentator on PBS, NPR, MSNBC, CNBC and U.S. talk radio, and his comments have appeared in such publications as The Wall Street Journal, The Economist, Business Insurance, USA Today, Fortune and Forbes.

Mr. Maatman also writes and lectures extensively on class action and employment litigation topics. He has authored six books on employment law topics and has spoken to employer groups throughout the United States, as well as in Asia, Europe, Canada and Mexico. Mr. Maatman is the author and editor of a widely circulated, highly regarded industry class action report, published yearly since 2003. The report, called by EPLiC Magazine “the bible on class actions that no corporate counsel should do without,” is widely praised for its sharp analysis backed by comprehensive research, helps corporate employers navigate an increasingly volatile class action landscape. Mr. Maatman is recognized regularly by legal publications for his excellent work on behalf of clients. He is a 2021 Law360 MVP for Employment Law, which is his sixth such honor from Law360 since 2013. Winners of this accolade have distinguished themselves from their peers by securing impressive successes in high-stakes litigation, complex global matters and record-breaking deals. Overall, Mr. Maatman has received more Law360 MVP awards than any other attorney in the United States.

Chambers USA: America’s Leading Lawyers for Business selected Mr. Maatman as one of the nation’s leading class action defense lawyers in its 2006 to 2022 rankings of U.S. lawyers. In its rankings, Chambers stated that “Maatman is absolutely phenomenal” and is “one of the top class action minds in the country.”

In nine of the last 11 years, BTI Consulting selected Mr. Maatman as one of the top attorneys in the Unites States in terms of client service and by distinguishing him as a Client Service All-Star. In 2014, American Lawyer selected him as “Litigator of the Week” relative to his back-to-back victories in EEOC v. Sterling and EEOC v. Kaplan, the two biggest pattern or practice lawsuits brought by the Commission in the last 10 years. In 2021, Mr. Maatman was inducted into the Legal 500 Hall of Fame in recognition of his continued excellence in representing clients in class actions. 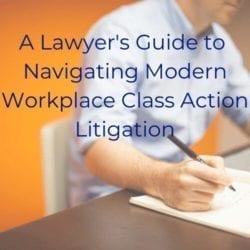